Following the departure of Paul Daimler from the Austro-Daimler plants in Wiener Neustadt in 1905 – he replaced Wilhelm Maybach in the design office in Stuttgart – Emil Jellinek, diplomat and businessman, participated in the company. He transformed what he considered the “obsolete” plant into a modern car factory and brought a brilliant young engineer on board – Ferdinand Porsche, winner of the Pötting Prize and already known for his Lohner automobile designs. On July 19, 1906 a new era began under his aegis as the new Technical Director for Austro-Daimler. 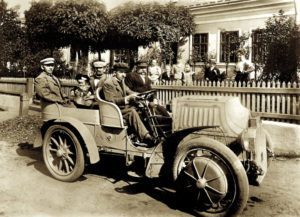 On July 27, 1906, the company was renamed “Österreichische Daimler Motoren Gesellschaft“. The company management was entrusted to Eduard Fischer, Wilhelm Strauß and Ferdinand Porsche. Six months later, the Maja 24/28 HP car developed by Porsche with a 5700 cc 4-cylinder motor and diamond gearbox was presented at the Vienna Motor Show. Archduke Leopold Salvator already demonstrated great interest at the exhibition. In 1908 he assumed ownership of the Maja 28/32; additionally equipped for him with a body by Cerny coachworks.

After a general sales crisis in the automotive industry, transmission problems on the Maja and the departure of Jellinek, the Maja was reworked. With improved, conventional transmission (cardan or chain drive) its successor, Type 28/30 HP or 28/32 HP from 1912, became the main model in Austro-Daimler´s portfolio. 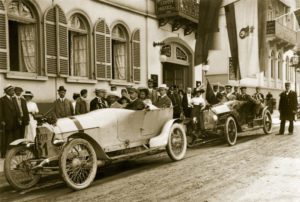 In 1910, after transforming the company into the “Österreichische Daimler-Motoren-Aktiengesellschaft“, Ferdinand Porsche, Eduard Fischer and Count Heinrich von Schönfeld achieved the sensational first three places in the legendary “Prinz Heinrich Fahrt” (1,840 km). They each drove a specially built racing car with an aerodynamic body, 4 cylinders, 86 HP, OHC, dual ignition and 5700 cc displacement. Ferdinand Porsche himself drove the winning car. The “Prinz Heinrich” type 22/86 went into series production and came on the market in 1911 – declared by many as the first sports car. The brand name “Austro-Daimler” quickly gained recognition.

In 1911, Ferdinand Porsche created the last new Austro-Daimler before WWI began – the Type 18/24 “touring car for city and country”. This type became known as the “Kaiserwagen“, as it was made a gift to Emperor Franz Josef by the Austrian Automobile Association.

From 1913, production was altered due to the war. Ferdinand Porsche developed war machinery for the First World War, inter alia the “Landwehr train“, a petrol-electric hybrid tractor with numerous single axle trailers for military purposes.

In 1917, Porsche became general manager in Wiener Neustadt and received an honorary doctorate from the Technical University. After the war, he built the 14/35 with the prominent upright pointed radiator¸ based on the early type 14/32 of 1910/11. The 3.6 l Type 14/35 played a significant role in the sport scene for Austro-Daimler, in particular the “Alpenwagen“.

In 1920, the renowned technician developed a 4-cylinder 4400 cc luxury car, the AD617, also known as a “Jagdwagen“, as it was used by the Swedish royal family for hunting trips. 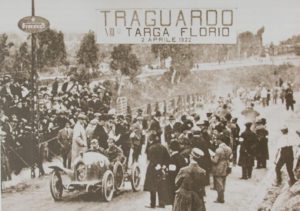 In 1922, Porsche celebrated great success with the design of the Sascha ADS-R race car – named after the film producer Count Alexander “Sascha” Kolowrat. The small car with 1.1 litre 4-cylinder motor boasted 50 HP and weighed only 600 kg. It was later also built with 1.5 l, 2 l and 3 litre 6-cylinder motors. “Sascha” family cars won 43 victories in races, among others at the Targa Florio in Sicily, in Barcelona, ​​at numerous hillclimbs and on the steep banked track in Brooklands (GB). Nevertheless, the car never went into production because the Austro-Daimler Board did not recognise the potential.

In 1923, Ferdinand Porsche left Austro-Daimler due to differences with the Supervisory Board. Afterwards, he assumed responsibilities as a member of the Management Board as well as design manager at Daimler-Motoren-Gesellschaft in Stuttgart.

To reflect your cookie selections we need to reload the page.